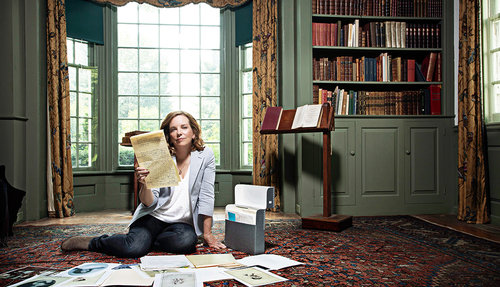 I was never that interested in history. A child of the ’60s, I always thought of myself as a feminist, but I happily deferred to my husband — a poli-sci major — when it came to guessing Jeopardy! questions or helping our three children with their social studies homework. All those treaties and battle dates just didn’t move me.

So in the spring of 2000, when I drove a couple of hours north of my home to tour the historic Bellamy-Ferriday House & Garden in Bethlehem, Connecticut, it was mainly to see the property’s famous lilac gardens. My mom had recently died, and I had a sense that the estate, once the country home of philanthropist and Broadway actress Caroline Ferriday, would take me out of myself and my sorrow for an afternoon.

I lingered among the sweet-scented lilacs, and then on a whim decided to tour the interior. Walking through the rambling 18th-century house, I came to Ferriday’s study, which remains just as she left it when she died, in 1990. On her desk stood a black-and-white photo of a group of smiling women. “Those are the rabbits,” the guide told me. “Prisoners at Ravensbrück, the largest all-female concentration camp in Hitler’s Third Reich.” These Catholic women had been arrested during World War II for their involvement in the Polish resistance. They were called rabbits because Nazi doctors turned them into laboratory animals, operating on their legs to insert glass, dirt and tetanus bacteria, or to remove bone or muscle tissue. Some of the 74 young Polish women subjected to these experiments died of infection or disease; others were executed when their usefulness ended. But 63 survived the war, and of these, Ferriday brought 35 to the U.S. for rehabilitation.

After hearing their story, I was unable to get these brave women out of my head. Recently retired from my job as an advertising copywriter, I had been planning to relax. Instead, day after day, I immersed myself in World War II history. I stayed up late, listening to books on tape about sea battles and the Luftwaffe as my husband slept beside me. Before long, I — a person who had never written anything much longer than a TV commercial — was traveling to Europe for research and working 12-hour days to outline a novel based on the rabbits’ story. Funny how curiosity can make a person work harder than any 9-to-5 job ever could.  Keep Reading…