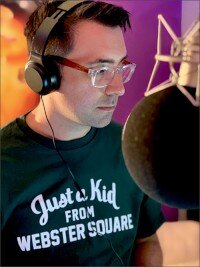 When author-illustrator Jarrett J. Krosoczka’s graphic memoir Hey, Kiddo (Scholastic/Graphix) was released in October 2018, it received wide and warm acclaim, including being named a National Book Award finalist and landing on numerous year-end, best-of lists. The book, told from the author’s perspective at age 17, recounts Krosoczka’s childhood being raised by alcoholic grandparents as the family dealt with his mother’s heroin addiction, and as Krosoczka’s burgeoning passion for art sustained him.

The project represented the culmination of a long creative and emotional journey begun some 20 years prior. As he told PW in 2018, “Many of those years were just spent thinking and wondering and imagining and building up the courage to actually write this book.” When his 2012 TED talk about how his imagination and love of drawing helped him weather the difficult circumstances at home went viral, Krosoczka was compelled to expand it to a graphic memoir.

Now, a year after its release, Hey, Kiddo has been adapted for audio by Scholastic Audiobooks. The recording features a cast of more than 40 performers, many of them Krosoczka’s family and friends, and he served as co-producer and co-director, alongside Paul Gagne at Scholastic. Krosoczka chronicled the recording sessions on his blog over a period of months and he’s now sharing some photos from those sessions with PW, together with more insight on the experience of adapting his memoir for a new medium.