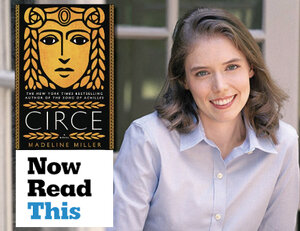 An instant New York Times bestseller, it’s no wonder PBS News Hour excitedly announced Tuesday their December pick for Now Read This book club is Madeline Miller’s widely praised Circe, a novel that reimagines the story of a lesser-known and yet much-reviled goddess and witch from the Greek epic poem The Odyssey.

“I am so astonished and honored,” Miller responded via Twitter.

Circe’s other accolades include winning the Goodreads Choice Award and being named a best book of the year in 2018 by NPR, The Washington Post, and many others.

In a review of the book in The New York Times Book Review, author Claire Messed writes that it “will surely delight readers new to the witch’s stories as it will many who remember her role in the Greek myths of their childhood.”

The book is also a feminist retelling of Circe’s story. As Miller writes: “It is a common saying that women are delicate creatures, flowers, eggs, anything that may be crushed in a moment’s carelessness. If I had ever believed it, I no longer do.”

At the end of December, fans can look forward to Miller’s appearance on PBS News Hour to answer reader questions about Circe. If you haven’t read Circe yet – there couldn’t be a better time to pick it up. Find a copy anywhere books are sold.

To inquire about booking Miller, get in touch with us today!