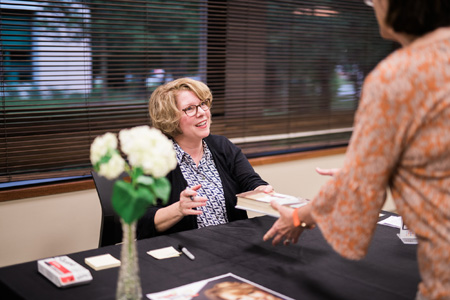 Melanie Benjamin took to the podium for the 14th annual Southwest Author Series and infused laughter with wisdom. She shared how she first wanted to be an actress and dreamed of playing other people on stage. But then she married, joking that marriage is where dreams go to die.

“Melanie Benjamin was incredibly engaging with a great sense of humor,” Colin Galloway (president of the Rotary Club of Dr. Phillips) said. “It was fun. We all enjoyed it.”

Benjamin has two children. At a school event, she saw a poster her son had made indicating the stay-at-home mom was a “cleaning lady.” That set her off on a journey to become more. She decided to try her hand at writing and soon was hired to write a parenting column and short stories for a local magazine. But she said that her writing meant authoring a book.

Then she came across a photograph of a little girl dressed in rags and learned she was Alice Liddell Hargreaves, the inspiration for Alice in Alice’s Adventures in Wonderland by Lewis Carroll. Benjamin wanted to know more about the girl’s life and wrote her first historical fiction book — Alice I Have Been — under a pen name.

Benjamin captivated the audience with tales of how she came up with the ideas for her subsequent books and teased some of the storylines. She encouraged would-be writers to get out, see things and read, read, read.

Writer’s Block Bookstore, an independent bookseller in Winter Park, sold copies of Benjamin’s books, which she autographed while chatting with participants after the presentation. The bookstore sold out of most of her titles.