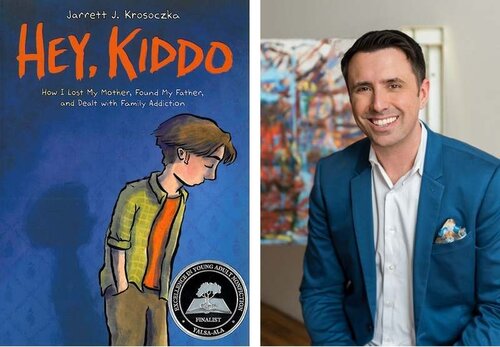 The 17th “One Book One Region Eastern Connecticut” initiative concludes with a Tuesday appearance at New London’s Connecticut College by this year’s honoree/author/artist Jarrett J. Krosoczka. He was selected for his graphic memoir “Hey, Kiddo — How I Lost My Mother, Found My Father, and Dealt with Family Addiction.”

One Book One Region Eastern Connecticut aims to unite citizens of all demographics to discuss ideas and society through books and literature. Previous selections and authors include Pete Hamill (“Snow in August),” Khaled Hosseini (“The Kite Runner”), Yaa Gyasi (“Homegoing”), David Benioff (“City of Thieves”), Tori McClure (“A Pearl in the Storm”), and Reyna Grande (“Across a Hundred Mountains”).

Since “Hey, Kiddo” was introduced as this year’s choice, dozens of libraries, schools, book clubs and social organizations have participated in discussing the work.

“Hey, Kiddo” is the beautifully and poignantly written and illustrated account — often humorous, frequently sad — of Krosoczka’s childhood, when he was raised in Worcester, Mass., by his grandparents while his mother struggled with heroin addiction. For years, all the young man knew, though, was that his mom was an affectionate but very infrequent presence in his life. Instead, his grandparents, who had several grown children of their own, provided love, comfort and support — albeit in a distinctively “old school” fashion typical of their own upbringing during the hard times of the Depression.

Krosoczka also had no idea who is father was for years. As “Hey, Kiddo” develops, the author uses flashback revelations to provide answers and context — a particularly effective way of conveying his own confusion and an ongoing sense of vague unease despite the security and reliability found through his grandparents, their home and the relationships with his aunts and uncles.

The most important development in his childhood was a fascination with and dedication to the craft of drawing. While certainly accepted in the school environment, Krosoczka’s exploration of art, and the encouragement of his teachers and family, provided a life-force of creativity and expression that ultimately resulted in an enormously successful career.

Krosoczka was a well-established author illustrator of children’s books and a husband and father of two young children when he finally decided to write “Hey, Kiddo.” He’s published more than 30 books including his Lunch Lady graphic novels. He’s a two-time winner of the Children’s Choice Book Awards Third to Fourth Grade Book of the Year and has been a finalist for the prestigious Will Eisner Comic Industry Award and National Book Awards 2018 for Young People’s Literature. Krosoczka lives with his family in western Massachusetts and, earlier this week by email, answered a few questions about “Hey, Kiddo,” his career, and the One Book One Region honor. Answers have been edited for clarity and space.