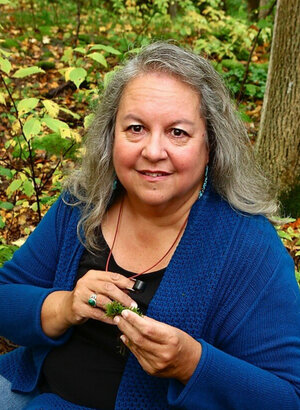 Earlier this year Robin Wall Kimmerer’s essay collection “Braiding Sweetgrass” climbed onto The New York Times bestseller list seven years after its publication. In her award-winning book, Kimmerer mixes her knowledge as a botanist and as a member of the Citizen Potawatomi Nation to explore the natural world’s many gifts, gifts we often overlook. Kimmerer is a professor of environmental science and forestry at the State University of New York, Syracuse.

BOOKS: How would you describe your taste in books?

KIMMERER: I love fiction with a compelling story but that also offers me a pathway to understanding things that have been mysterious to me. One example is Richard Powers’s “The Time of Our Singing” in how it revealed to me what it was like to be an artist of color in the 1950s.

BOOKS: Do you have favorite books about plants or nature?

KIMMERER: Nature and plants are themes that I care deeply about in fiction. Elizabeth Gilbert’s “The Signature of All Things” has a lot about the natural world, and I love Annie Proulx’s “Barkskins.” It’s the story of the genocide of white pines that was caused by settlers as they moved across the continent.

KIMMERER: Chickasaw writer Linda Hogan’s essay collection “Dwellings” brings you into the lives of other beings, from bats to cactuses to wildflowers. She’s got a new book, “The Radiant Lives of Animals.” Jon Young’s “What the Robin Knows” is about how to read the language of birds by watching what they do. Who knew that the angle that a bird flies has a meaning? I didn’t, and I’m a birder. That is the kind of nature writing I like, one with an expansive sense of wonder. Someone who was formative for me as a young reader was Loren Eiseley, a fine scientist who wrote these deeply reflective essays about the mysteries of the natural world.

BOOKS: Have there been any other pivotal books for you?

KIMMERER: Someone who set me on the path of botanical writing is someone who’s not known for it, Leslie Marmon Silko. She’s best known for her novel “Ceremony,” but her “Gardens in the Dunes” is a story about the indigenous struggle for identity and life, but it is also about our relationships with plants. I rarely reread books, but I go to that book over and over.

BOOKS: Did you read about the natural world as a kid?

KIMMERER: Gene Stratton Porter wrote about a girl and an older woman who were both naturalists. That was so formative for me in opening the possibility that one could be a female naturalist. Another memorable childhood book was “The Secret Garden” by Frances Hodgson Burnett. There was the story of illness and loneliness but it was in a garden. I remember the plants they found.

BOOKS: Is there a type of book you wouldn’t pick up?

KIMMERER: Thrillers and suspense, though I like a good, classic non-scary mystery. I’m a big fan of the Canadian writer Louise Penny. Her books are mysteries but really they are character studies and studies of place. I also like Marcie R. Rendon, who is an Ojibwe writer, whose mysteries are set in North Dakota.

BOOKS: What is on your upcoming pile?

KIMMERER: I would like to read more by the Oregon writer Brian Doyle, who died last year. He writes about the natural world as if the animals are sentient characters. I would love to read Robert McFarlane’s new book, “Ghostways.” I just started “Sand Talk,” by Tyson Yunkaporta, an Australian writer. I’m only 10 pages into it, but it’s revelatory about Aboriginal thinking.

BOOKS: What would you suggest as a good read for the pandemic?

KIMMERER: I think what we need now is something that nurtures our values and gives us strength to hold them up as well as remind us to have gratitude for what we have, as opposed to what we don’t. If I had to turn to an author for that I would look to Linda Hogan because she fills you with this sense of the richness of the gifts around you, both spiritual and material.

If you’d like to host Robin Wall Kimmerer for an event, be in touch with us today!