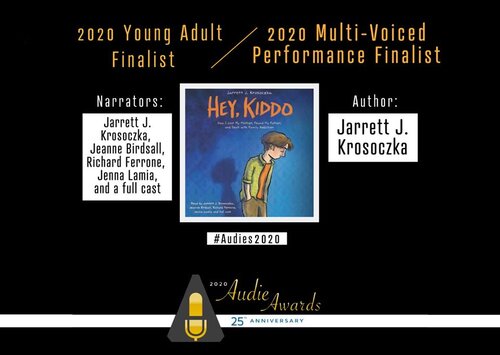 “From the description alone, I knew ‘Hey, Kiddo’ would be a powerful memoir. I didn’t expect it to be a life-changing listen. On behalf of the kids who needed this, thank you, Jarrett!” —Heather S., Audible Editor

New York Times best-selling author/illustrator Jarrett J. Krosoczka creates books with humor, heart, and a deep respect for his young readers—qualities that have made his titles perennial favorites on the bookshelves of homes, libraries, and bookstores. His most recent book, Hey, Kiddo (Oct 2018), is a graphic memoir about growing up in a family grappling with addiction, and finding the art that helps you survive. Hey, Kiddo was a finalist for the 2018 National Book Award for Young People’s Literature and recently, crossing over into audio is an Audible.com Editor’s Pick.

I was thrilled to talk with author Jarrett J. Krosoczka about the process of adapting his acclaimed graphic memoir, HEY, KIDDO: How I Lost My Mother, Found My Father, and Dealt With Family Addiction, into a full-cast audiobook. And I was even more excited when earlier this week HEY, KIDDO won the American Library Association’s 2020 Odyssey Award for the best audiobook produced for children and/or young adults. There are so many things to love about this audiobook, but for me the most remarkable aspect was the casting. Krosoczka tapped members of his own family to narrate the true story, and the result is unforgettable. Below, read my Q&A with Jarrett J. Krosoczka.

AF: Why was it important for you to adapt HEY, KIDDO for audio? Are there unique benefits to the audio format?

Jarrett J. Krosoczka: Initially, I thought this would simply be a fun and challenging project—instead of telling my story with words and pictures, I would be telling the story with sound and time. But after one of my live theatrical reads of HEY, KIDDO, I met an attendee who is blind. He told me that he had no other entry point into the book before the reading. That’s when I suddenly realized that the audiobook would also give more access to this story for those unable to see the artwork in the book. From there, I heard from so many educators whose students have learning differences but needed to be connected to this story. An audiobook offers such important access.

AF: What was your process for adapting this graphic novel into an audiobook? What were the challenges? What were the most important things you really wanted to get right?

JK: Since HEY, KIDDO is a graphic memoir, a large portion of the story is told with the artwork. As an author and illustrator, I attempt to strike the right balance between words and pictures—allowing each to have their own stage to own. Our first step was to conduct an audit of what story elements were being told exclusively through the art. From there, I wrote additional narration. With each pass of the audiobook, we noted story elements that weren’t getting conveyed on audio and then recorded additional narration and added more sound effects or guffaws from the voice talent. With the audiobook, I was able to communicate another aspect of my upbringing that wasn’t possible in print—the regional accent of Worcester, Massachusetts. That was a top priority for me. Additionally, I could not have asked for a better actor than Jenna Lamia to handle the role of my mother, Leslie. As in the print book, I wanted to communicate that Leslie was a troubled and complicated person, not just a villain who used drugs. Jenna brought so much heartbreak and humanity to the role.

AF: HEY, KIDDO tackles a serious topic but still manages to balance that seriousness with funny moments. How did the audio format help or hinder that balancing act?

JK: Oh, the audio format was able to convey the humor in a totally different way. In the print book, I use facial expressions, but with the audiobook we used timing and voice inflection. Jeanne Birdsall and Richard Ferrone are perfect for the roles of my grandparents, Shirley and Joseph. They got the tone and spirit of the “characters” spot-on. And as comedic as their performances are, they have the range to also delve into anger and agony.

AF: There are some unforgettable voices in this audiobook, with some of the characters playing themselves. How were the casting choices made?

JK: That was a wild experience, bringing in my real-life family and friends into the recording booth to voice themselves. We knew that we would need a large amount of vocal talent when we created a spreadsheet of each individual voice found throughout the book. And, of course, we needed professional actors for the main roles. Monte Belmonte, a great friend and local radio personality, read as my grandfather in the live reads. And while his performance was stellar, his voice wasn’t right to play my grandfather in the audiobook—he sounded too young. We still wanted to get him involved with the audiobook to read as one of the high school teachers. That casting decision made me realize that we should reach out to my actual high school teachers whom I am still in touch with. I knew they would get a kick out of that. And it just snowballed from there. We got Pat to read as Pat and his son, Seamus, to read as the younger Pat. From there, I reached out to my family members, and they were all game!

JK: There were many profound moments. Especially with my aunts, Lynn and Holly, who are really like sisters to me. They also suffered through a lot of the consequences that came with the addictions our family members faced. But like the book, there is also a lot of space for levity, and we shared many laughs while in the recording booth. The most profound moments came when my birth father came in to read as himself and we relived some of those painful initial interactions we had when I was 17.

With the professional actors, they didn’t need much direction, though I had to ask Jeanne to go deeper and sound more cutting with some of Shirley’s retorts.

My daughter is an actor, so she approached her contribution like a role. She put herself in the shoes of her little brother, who is 3, and imagined what it would be like for him to have his mom taken away. And then later, as the character grew, what would it be like to be a kid who then must face the tougher realities of the circumstances on hand. Regardless of this production, we would be connecting our kid to her ancestors, just as my grandfather did with me. But the book, and my daughter’s involvement in the audiobook, really helped her develop a relationship with her great-grandparents.

AF: Can you recount a favorite moment or a special moment during the production process?

JK: Each voice actor needed direction in different ways. In many cases, we were dealing with non-performers who needed to get away from reading and into performing—which came more naturally for some. But we ended up getting great performances out of the real-life people, in part, because I was there, coaching them along. I knew all the different personalities. I mean, this was a parade of everyone who was instrumental in my upbringing coming in and out of the recording booth in a tightly scheduled day. So that parade? That was my favorite part.

AF: What surprised you most about the process or the final product?

JK: I was surprised by how much I teared up while listening to every single pass of the audiobook. It’s one thing to tell your story and put it out there; it’s an entirely different thing to have a full cast re-creating the story. Then there was the masterful editing and soundscapes by Steve Syarto. I quite literally felt as though I was there, sitting in my childhood kitchen, watching the action unfold. I am just astounded by how all of this turned out. From the music that Scotty Huff put together to the steadfast leadership of Paul Gagne, I am just thrilled that everyone took a chance to adapt this graphic memoir. It was a big step outside of everyone’s comfort zone.

JK: I hope that we get to see more adaptations of graphic literature. It certainly takes a lot of effort and work but will prove to be especially beneficial to those who otherwise don’t have any other entry point to these stories.

For more on the Audie Nomination, look here!

To inquire about booking Krosoczka get in touch with us today! To see her media kit and learn more check out him author profile!