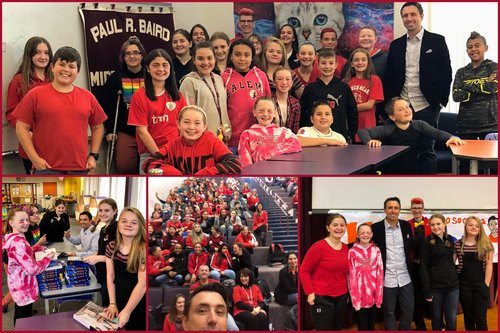 In partnership with Ludlow CARES Coalition, Baird Middle School kicked off Red Ribbon Week this year with an author’s visit by New York Times best-selling author/illustrator Jarrett Krosoczka. During his talk Krosoczka spoke to students about his latest graphic novel, Hey, Kiddo; a  memoir about being raised by his grandparents and growing up in a family dealing with addiction.  He reflected on his childhood and adolescence, as well as sharing how art has kept him engaged and motivated throughout his life.

“Addiction crosses all boundaries — gender, race and socioeconomic status,” said Krosoczka as he spoke to the audience. “Addiction affects students, parents, family members and friends of all ages. My hope in writing this book, Hey, Kiddo, was to help readers better understand how addiction affects all of us, and to provide an example of how to persist through difficult times by focusing on personal interests and talents.”

Like an estimated eight million children in the United States, Krosoczka  told the audience that he too is the child of a parent who struggled with addiction; first speaking publicly about his mother’s addiction to heroin, and being raised by his grandparents, in a widely shared 2012 TED Talk (How a boy bcame an artist).

Krosoczka is a two-time winner of the Children’s Choice Book Award, an Eisner award nominee, and the author/illustrator of more than 30 books for young readers. He is best known for his Lunch Lady series and his picture books, including Punk Farm, and Star Wars Jedi Academy books.

He was also very proud to share with the audience that, Hey Kiddo, has been selected as one of the five finalists for the 2018 National Book Awards for Young People’s Literature. The winner will be announced on November 14 at the 69th National Book Awards Ceremony and Benefit Dinner at Cipriani Wall Street in New York City.

Sprinkled throughout his presentation Krosoczka shared personal family photos and videos, played music from his youth, showed clips from his TED Talk, read excerpts from his book, and shared both difficult and rewarding experiences from his childhood with his “not so perfect” family. His conversation was impactful and inspiring on a multitude of levels. Keep reading…