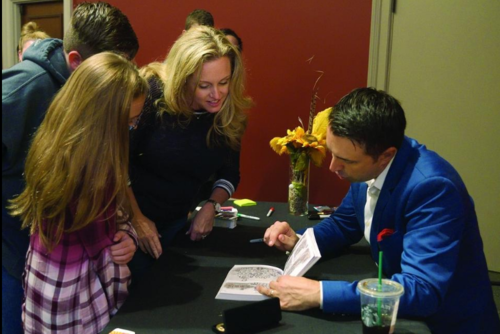 It’s been a whirlwind year for New York Times bestselling author and illustrator Jarrett J. Krosoczka since his book “Hey, Kiddo” was published in October 2018. Being named a finalist for a National Book Award was just one of the accolades he’s racked up for this touching and timely graphic memoir about the challenges of growing up with a drug-addicted single mother and a father who was never around. (He has since forged a good relationship with his father, however.)

Born in Worcester and raised here by his maternal grandparents, Krosoczka says he inherited the artistic gifts that have led to his success from his late mother and honed them in classes at Worcester Art Museum, where his grandparents enrolled him as a child. He published his first book, “Good Night, Monkey Boy,” at age 23 and since then Krosoczka (Krah ZOSS kah) has put out more than 40 books, many of which have become favorites on young readers’ bookshelves. “Good Night Monkey Boy” was published in 2001 and the list of his greatest hits has grown from there with “Punk Farm,” “My Buddy Slug,” the “Lunch Lady” series, and the “Star Wars Jedi Academy” series among them.

Krosoczka is a two-time winner of the Children’s Choice Book Awards Third to Fourth Grade Book of the Year, and has given two Ted Talks that have been watched millions of times. The list of awards just for “Hey, Kiddo” has become extensive and is still growing. In addition to the coveted National Book Award Finalist, honors include being listed on The New York Times Notable Children’s Books for 2018; Time magazine’s 10 Best Books of 2018, young adult and children’s category; Amazon Best Graphic Novel of 2018; Publisher’s Weekly Best of 2018, young adult; Boston Globe Best Children’s Books of 2018; and in October this year, Krosoczka took home the prestigious Book of the Year Award at the Harvey Awards at New York Comic Con.

Now 41, the shy, artistic kid who landed his first book contract 20 years ago has become a force in the publishing world, sharing his gentle message of hope and healing with the many young people today struggling with addiction issues themselves or among their families and friends.

Krosoczka lives in Western Massachusetts with his wife, Gina, and their three young children.

To inquire about booking Krosoczka, get in touch with us today!