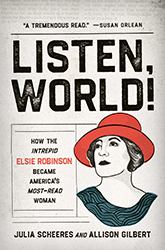 Courtesy of the Publishers Weekly
June 2022

Memoirist Scheeres (Jesus Land) and journalist Gilbert (Covering Catastrophe) deliver a page-turning biography of Elsie Robinson (1883–1956), a prominent 20th-century journalist and cartoonist. Focusing on the first 50 years of her life, the authors paint a vivid picture of the challenges Robinson faced: after leaving a repressed and loveless marriage in Vermont, Robinson returned with her young, asthmatic son to her California roots, where she worked as a gold miner and then, faced with near starvation, found a job writing a weekly children’s column for the Oakland Tribune. Robinson eventually worked her way up to become the highest-paid newswoman in the Hearst empire through her syndicated column “Listen World!” The authors spotlight her fights against racism, capital punishment, and antisemitism, as well as her frankness in her belief that women should have satisfying lives that consist of more than household drudgery (“If your conception of woman’s highest duty is to be a vacuum cleaner, be one, but don’t grumble if your family parks you behind the kitchen door,” Robinson wrote in one column). The account is enlivened with copious excerpts from Robinson’s column and her memoir, all of which bring home her firebrand style. This entertaining account delivers. (Sept.)